Are you looking out at the last five days of NaNoWriMo and wondering how you’re going to make it to the end? Are you sitting down to write each day and doubting that this garbage is ever going to look like a finished novel? Whether you’re on track with your word count or scrambling to catch up, the last few days of NaNoWriMo can be some of the hardest writing days as you face the reality of this crazy month ending.

This November has had a lot of ups and downs for me. Although I’ve managed to stay on track with my word count and (so far) hit my goal of writing every day, I’ve spent much of the month doubting my story and second-guessing every word I write. I didn’t plan it out fully, so much of what I wrote feels rambling and unnecessary, the kind of writing that will get cut out when I go back to revise. It’s been discouraging, knowing that many of these words won’t even end up in a final version. Some days, that’s all I can think about when I sit down to write.

So how do you keep writing anyway?

I have a couple of strategies that help me when I get into this mindset. What works for me might not work for you, but why not give it a shot?

Erase the concept of “revision” from your brain. You’re not allowed to think about revising! This can be a huge challenge for some writers, including myself at times, who already want to think about the next step and how to make this draft less terrible. But revising doesn’t bring up your word count! Revising can re-enter your brain in December! For now, focus on the first draft and don’t think about what comes next.

Let yourself write garbage. Yes, a lot of this might end up being deleted, but you can use that garbage to find the nuggets of gold that will become your final draft. As the saying goes, you can’t edit a blank page, and by letting all that garbage come out, you allow the potential for a masterpiece to come out as well. It’s frustrating and scary, I know, but it’ll be worth it in the end!

Eliminate distractions. When I feel like my writing is terrible, it’s so much easier to scroll through Twitter or watch YouTube videos. The writing can’t be terrible if it’s not written, right?? But that does nothing to increase your word count. Sometimes, even just staring at your document for a while can push you to write some more words. Put your phone on airplane mode – or better yet, in a different room entirely – and block the websites that distract you, and force yourself to write.

Don’t compare yourself to others. I often find myself discouraged by others who write better or faster than me, whether it’s fellow NaNoers or published authors. Sometimes, I have to put down a book I’m reading because it makes my own writing feel like trash, or avoid looking at other writers’ posts about their progress. These things can be inspiring, but they can also be disheartening when I feel like I’m not doing as well.

Be kind to yourself! Who knows, you might later look back at the words you wrote this month and realize that they’re not as bad as you remember. My writing often feels the worst when I’m in the thick of it, so it’s important to remember that you are doing an incredibly difficult thing by writing a book, and you deserve to feel proud of what you’ve accomplished.

I hope these tips have helped you to push through to the end of the month! We’re so close to the end and I know we can survive! Good luck with the garbage.

My own word count is sitting pretty at 45,046 words, which is ahead of schedule for yesterday’s goal (I haven’t written yet today). With five days left and only 4,954 words to go, I have to write 990 words per day to finish. I’m so close!

I’m currently in one of those rare moments when I’m feeling good about this novel. I feel like I’ve finally gotten to the meat of the story – after only about 40k words – and even though writing it is no easier, I’m excited for what’s coming. I haven’t planned out this part of the story as much as I planned out the beginning, so I basically start writing each day with no idea what’s going to happen! Yikes, but also cool.

This story is divided roughly into three acts, and I finished the first act last week at 38k words. Which means, if each act is that length, this novel is going to be around 114k words. Wowza. That’s a lot more writing to do. We’ll see if that ends up happening!

Here is my progress so far, as of last night: 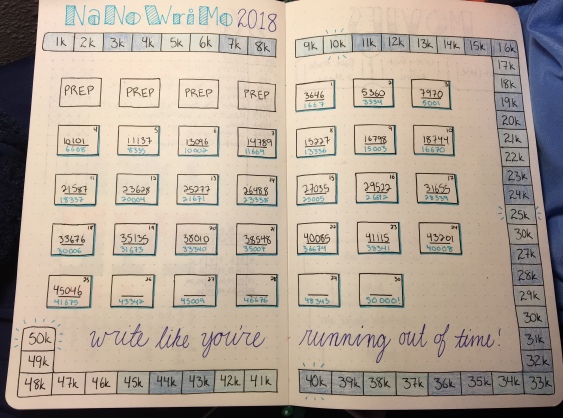 An excerpt from this week’s writing: “It occurs to me that none of them have seen an ocean before. All three of them, even Asher, stand with mouths open, their eyes alight with the sun glinting off the distant water. Far, far away, the horizon fades into the sky in a hazy blue line.”

Writing music: I’ve been having so much fun writing the slow-burn romantic subplot of this novel, and two songs in particular have been reminding me a lot of my main couple: “If I Say” by Mumford and Sons and “Somewhere Only We Know” by Keane.

Last time, I introduced you to my three main characters, and this time I want to introduce a few more! These four are secondary characters, but they have been increasingly important to the plot in my writing from the past few weeks. 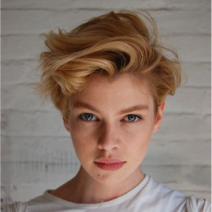 How is NaNoWriMo going for you? Do you have any tips for finishing out the month despite frustration?

One thought on “Writing a book, part 3 | how to finish NaNoWriMo when every word feels like garbage”