Welcome to the Women’s History Month Reading Challenge! This month is all about celebrating women and books, both the ones who write them and the ones inside them. In addition to reading books based on challenges (which you can find out about here), I am doing a number of themed blog posts for the blogging section. The first one for the month is female characters that inspire me! Feel free to join in with any of these:

March 11th: books with women on the cover

Today, I’m going to talk about my top ten female book characters that inspire me in some way. This isn’t necessarily a list of favorite characters, though there is certainly overlap! Now let me tell you about these amazing ladies!

The Hate U Give by Angie Thomas

It’s impossible to read The Hate U Give without admiring Starr for her courage and resilience in the face of trauma and injustice. She learns how to use her voice, stand up for what’s right, and do it over and over again even if the world doesn’t want to listen. I’m delighted that so many kids get to read about a character like her!

Who didn’t grow up reading the Harry Potter books and relating to Hermione?? Obviously, her intelligence and hard work make her admirable, but what really inspires me is her strength and ability to grow and eventually admit when she’s wrong. Hermione Granger is such an incredible and iconic character! ❤

Another iconic character from a series that shaped so many of my generation! I love Ginny Weasley because of her heart, her desire to stand up for what’s right, and her general joy towards life. She’s a true Gryffindor and I fall in love with her a little more every time I reread the series.

Felicity is a young woman with ambitions that are blocked to her because of the time period. But that doesn’t stop her! She will do whatever it takes to reach her dreams and be the person she wants to be and she refuses to be defined by the men in her life. Plus, she doesn’t care about being likable, which personally I find admirable.

One of the most well-known and beloved fictional characters of all time, so obviously I had to include her on this list! Elizabeth is fiercely independent and refuses to accept anything less than happiness for herself. She speaks her mind and lives her life the way she wants to, and she owns my heart.

Frances is one of those characters who I relate to so strongly, so reading her story and seeing her development makes me so happy that she exists. She inspires me through her growth as a character, learning to accept the parts of herself that she’s ashamed of and loving weird, nerdy stuff unapologetically. I love her!

Inej has gone through so much in her life, but through it all she remains hopeful and retains her dream that she can make the world better. She might be a criminal, but she has an unshakable sense of justice and she’s always trying to help the people who can’t help themselves. She’s so strong and I adore her!

Katsa fits one of my absolute favorite archetypes: the overly aggressive and emotionally repressed female character whose development doesn’t involve her becoming softer or more caring for the benefit of the men around her. Katsa is tough and fierce and deadly, and I would be honored to be murdered by her.

One of the most complex and nuanced characters I’ve ever read, Evelyn Hugo is an absolute QUEEN. She always knows exactly what to do to take advantage of any situation, and she will do whatever it takes to achieve her goals. I can’t help but admire her Slytherin drive.

Percy Jackson and the Olympians by Rick Riordan

Reading the Heroes of Olympus series recently made me remember how much I adore Annabeth Chase! This daughter of Athena is crazy smart and incredibly brave, supporting her friends and going on to become a hero in her own right. She’s not afraid to speak her mind and say when she’s the best person to do a job.

What female characters inspire you? 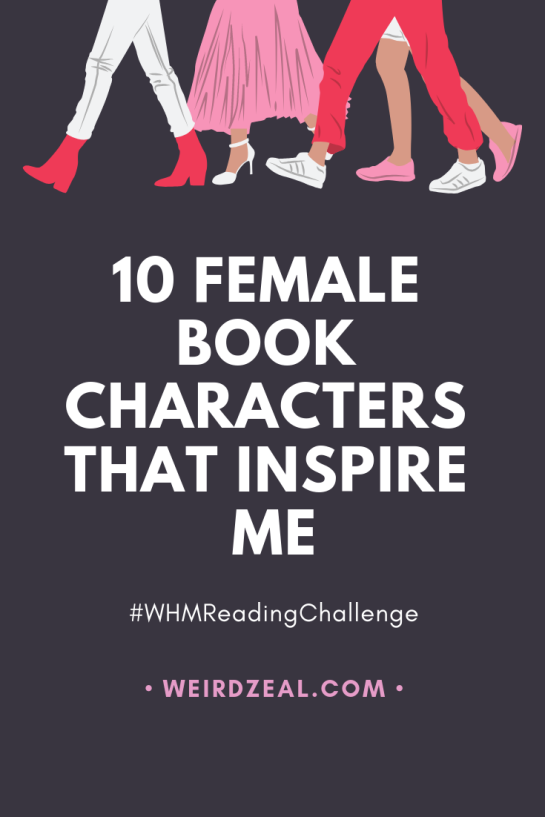 25 thoughts on “10 female characters that inspire me | #WHMReadingChallenge”