Welcome back to another writing update!

Today I’ll be doing the “Your WIP in GIFs” tag, which I was not tagged for by anyone but I stumbled across it and thought it would be fun! And I’ll be giving an update on my Camp NaNoWriMo progress!

If you want to find out a little more about my current WIP, you can check out my last writing update. 😊

Your WIP in GIFs

Time to introduce your main characters!

If you were to meet your main characters, how would you react?

Also, I’d probably want to apologize for everything I put them through lol.

And if you were to meet your antagonist?

My antagonist(s) are still not super fleshed out, since they haven’t really come into the story yet (oops), but just in general they are…the worst.

Is there any romance in your WIP? How would you sum it up in gifs?

My WIP is very romance-light, but the primary couple (not a main focus of the story at all) is basically two people who admire and respect each other a ton and are adorable.

How do other characters feel about this ship?

Again, it’s not very prominent in this story, but the other characters are fully on board with this ship.

How do you want people to react to reading your WIP?

I tag the following people

No one, since I wasn’t tagged by anyone! But feel free to consider yourself tagged if this looks fun!

If you’ve been following along, you know that in April, I’ve been doing Camp NaNoWriMo, which is an offshoot of National Novel Writing Month. You get to choose your own goal rather than aim for the set 50,000 words.

This month, my goal was to write 30k words. And I am very, very behind.

The kind of behind that leaves me with 4839 words to write in the last two days of the challenge. (As of writing this post on the night of April 28th.) 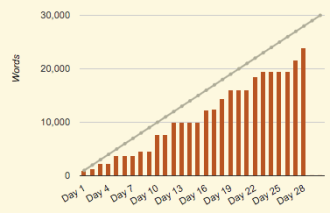 But since I hate failing, even self-imposed goals that mean nothing, I am still determined to finish! I only have to write 2,420 words both today and tomorrow! That’s nothing! 😅

As you can see from the graph, my progress this month has not been steady. My schedule at the moment is very irregular, which makes it hard to get into a writing routine that I need so badly in order to write regularly. I’ve also been working a lot this month, and even though I’m liking my job, it does leave me exhausted at times, not wanting to spend brainpower on writing.

All that said, despite my struggles with actually sitting down and writing this month, I’m actually still really, really enjoying this story!

By the end of March, I had written about 17k words, and for April, I decided to start the story over. I’d done some more character and plot work and felt like I gained a much better sense of this story having written some of it already. So for April, I started back at square one, and hopefully by the end of the month, I’ll have 30k words!

I love all of these characters and I think I know them so much better than I did starting out. Even though I’m currently making most of it up on the spot, there are several larger plot points on the horizon that I can’t wait to get to.

WHEN I finished Camp NaNo, I’m going to continue working on this story! Last post, I said I’d like to have a finished first draft by the end of June, and I’d still like to aim for that. Not sure if that’s going to happen, especially considering that I have no idea how long this book is going to be, but why not shoot for the stars!

Wish me luck! 😅 I’ll just be over here typing furiously.

An excerpt from my recent writing:

“When I breathed in, the cold air burned in my lungs, filling me up until I felt as if I was more sky than girl.”

Anyone else finishing off Camp NaNoWriMo? How would you describe your story in gifs?