“Sometimes it feels as if I’ve been interacting with everyone here from behind some kind of veil – as though I’m allowed to be here, but not engage. To look, but not touch.”

Enter Jack, class clown and constant thorn in Pepper’s side. When he isn’t trying to duck out of his obscenely popular twin’s shadow, he’s busy working in his family’s deli. His relationship with the business that holds his future might be love/hate, but when Big League Burger steals his grandma’s iconic grilled cheese recipe, he’ll do whatever it takes to take them down, one tweet at a time.

All’s fair in love and cheese — that is, until Pepper and Jack’s spat turns into a viral Twitter war. Little do they know, while they’re publicly duking it out with snarky memes and retweet battles, they’re also falling for each other in real life — on an anonymous chat app Jack built.

As their relationship deepens and their online shenanigans escalate — people on the internet are shipping them?? — their battle gets more and more personal, until even these two rivals can’t ignore they were destined for the most unexpected, awkward, all-the-feels romance that neither of them expected.

First of all, a huge thank you to the publicity team at Wednesday Books for including me in this blog tour and providing me with an eARC. This is the first blog tour I’ve taken part in and I got lucky to end up with a book that I ended up loving so much!

Second of all, can we talk about how completely adorable and amazing this book is??

I came into this book from a reading slump, not very excited about it or reading in general, and not expecting much from it beyond an entertaining rom-com. What I didn’t expect was for this book to grab me by the collar, spin me around until I was dizzy and couldn’t bear to put it down, pull me out of my reading slump, and kick me out the other side wondering how I ever could have doubted it.

The story follows two POVs: Pepper Evans and Jack Campbell. Pepper is an uptight, straight A’s student with Ivy League dreams, the daughter of a successful fast food empire. Jack is the class clown and twin brother of the most popular boy in school, whose family owns a small but popular deli. The two already don’t get along. Things only get worse when they get into a Twitter war through their respective company accounts over a grilled cheese recipe.

In many ways, this is a classic rom-com with all of the wonderful and wacky tropes that come along with this type of story: hilarious miscommunication and misunderstandings, convenient coincidences, witty and flirtatious banter. (SO much banter.) Pepper and Jack were just fun to read about; every scene they had together put a smile on my face. Plus, you know how I love a cheesy (hah) food pun, and this book delivered.

“You know, for someone named Pepper, you’re pretty salty about losing.”

But the book also strikes the perfect balance between silly rom-com and genuinely impactful coming-of-age story. Pepper and Jack aren’t just flat snark machines; they’re complex, fascinating characters who deal with some heavy issues like family expectations, complex sibling and parent dynamics, and the pressures of growing up. The book portrays the realities of the stress placed on teens to do so many different things at once: succeed in school, do a million extracurriculars, have a social life, and maintain an online presence.

I loved how Emma Lord dealt with these issues, not just through the main characters, but through side characters like Pepper’s main academic rival, Pooja. It’s an important thing for kids to read about, that your entire life isn’t determined by what you do or don’t accomplish in high school, and that the education system pitting kids against each other is messed up. I wish this was a book I’d had when I was a teen.

“It’s weird, how you have no idea how far you’ve come until suddenly you can’t find the way back.”

If you’re a fan of rom-coms like You’ve Got Mail, YA contemporaries that are both silly and thought-provoking, banter, puns, and delicious-sounding food (please Emma Lord drop the recipe for Monster Cake), then do not miss this book. I had a blast while reading it. There were several times that I was so invested that I had to remind myself that the stakes were just two kids getting together, nothing life or death. It would get physical reactions out of me: I held my breath during tense scenes, hugged my knees to my chest and squealed during cute scenes, and once, shook my fist in the air like a cartoon villain when something went wrong. (I’m just glad no one was in the room with me when it happened.)

This book is definitely making the list among some of my favorite YA contemporaries. Adorable, timely, and entertaining from start to finish, it was exactly what I needed in my life. You’re probably not going to get me to shut up about it for a long time.

“There you have it, folks. A fitting end to the cheesiest romance ever told, and a love we can all brie-lieve in.”

*ARC PROVIDED BY THE PUBLISHER IN EXCHANGE FOR AN HONEST REVIEW. QUOTES ARE SUBJECT TO CHANGE.*

Emma Lord is a digital media editor and writer living in New York City, where she spends whatever time she isn’t writing either running or belting show tunes in community theater. She graduated from the University of Virginia with a major in psychology and a minor in how to tilt your computer screen so nobody will notice you updating your fan fiction from the back row. She was raised on glitter, grilled cheese, and a whole lot of love. Her sun sign is Hufflepuff, but she is a Gryffindor rising. TWEET CUTE is her debut novel. You can find her geeking out online at @dilemmalord on Twitter. 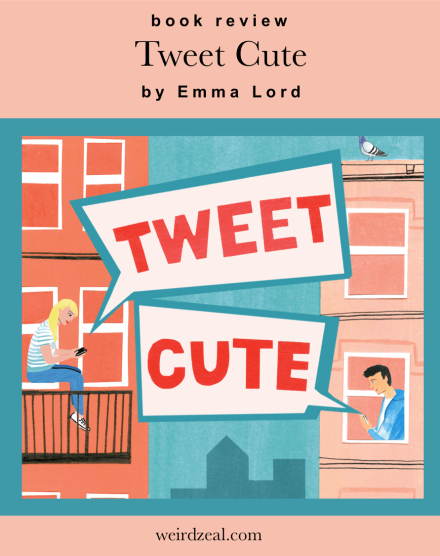