It’s time to talk about some books I’ve read recently! I don’t know how to write intros. All of these books are 3 or 3.5 stars. Let’s get into my reviews!

The Language of Spells by Garret Weyr

“Everyone can look at the world. But only those who pause to see what is wrong can change it.” 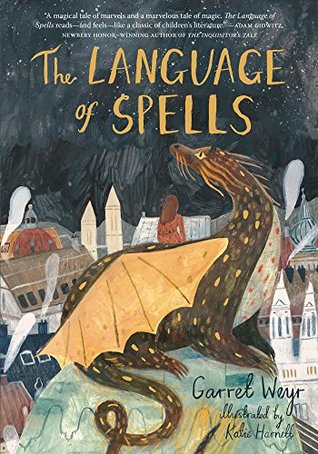 A dragon named Grisha and a young girl named Maggie meet at a hotel in Vienna one night and become unlikely friends. As the two of them grow close, however, they uncover a dark secret about the city’s past and dragons that have gone missing.

This middle grade book is charmingly sweet and easy to read, with some surprisingly serious and thought-provoking messages about memories, storytelling, and historical oppression. I could imagine this being a fun book to read aloud with a young kid. The way it wove together dragons – which just exist in this world that’s otherwise identical to our own – with history, mentioning lots of historical events like the World Wars, made it feel grounded. And the friendship between Maggie and Grisha was undeniably adorable.

However, the pacing of this book was a problem. We didn’t learn about the main conflict of the book until halfway through; way too much time was spend on Grisha’s early years, which hardly ended up mattering to the plot. It even took forever to meet Maggie, the other main character. In comparison, the ending felt rushed. Plus, I had a lot of questions about the magic system that were never answered. I get that it’s a kids book, but I wanted more detail! While this book was sweet, and I’m never going to complain about dragons, it wasn’t as wonderful as I’d hoped.

Bonds of Brass by Emily Skrutski 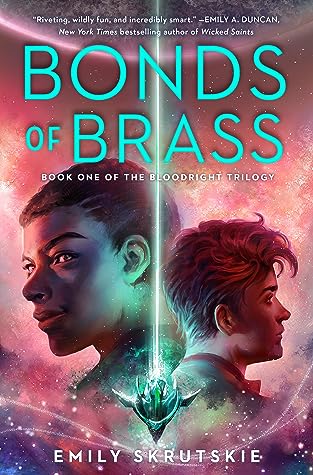 When Ettian finds out that his best friend, Gal, is secretly the heir to the empire that colonized his home planet, the two of them are forced to flee their military academy. On the run, Ettian has to decide whether he’s going to help Gal claim his rightful throne or join in the rebellion that’s growing against Gal’s empire.

I feel so conflicted about this book. I’m going to try to explain it without spoilers, so bear with me.

For much of this book, I was confused by the characters’ motivations, particularly Ettian’s. I kept feeling like he wasn’t making choices that made sense in his situation, and the reasoning he gave didn’t sit with me. Plus, there was an emotional disconnect from his narration that frustrated me. So I spend much of this book annoyed with him and the decisions he was making because I didn’t understand them.

Then at the end of the book, there’s a Plot Twist that makes us reevaluate everything we’ve read up to that point! And it was a Very Good Plot Twist that makes me want to read the next book despite not loving this one! It clarified a lot (though not all) of the motivations that I was confused about earlier…but that doesn’t make up for the fact that I was frustrated for so much of the book. I don’t know how to feel!

Also, this is the second Emily Skrutskie book I’ve read and the second that I’m rating 3 stars, so I’m thinking that she’s just not the author for me. Though I’m probably still going to continue this series because I’m invested now. Anyways, go read this book if you like space stuff and/or if you wanted Finn and Poe from Star Wars to kiss.

“It’s not my murder,” Miss Brontë insisted. “It’s our murder, in that it benefits us all.” 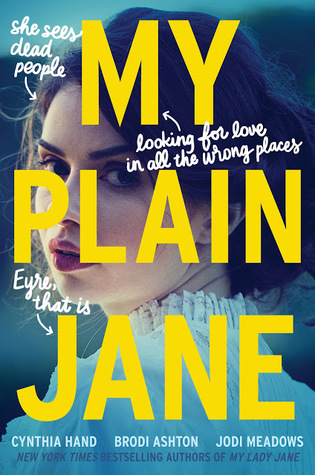 This loose retelling of Jane Eyre follows said character, along with her good friend Charlotte Brontë, on an adventure full of ghosts, Gothic manors, and mysterious gentlemen.

Just like the first book in this series, I found myself giggling through most of this book. It’s nice to escape into something ridiculous that has an interesting take on an old story while not taking itself too seriously. The way Charlotte Brontë’s story was woven in with Jane’s was clever, not to mention how perfectly ghosts fit into the aesthetic of the book. This book takes some sharp turns from the original story, but there were some, dare I say, improvements to how Jane’s ended up?

Still, I think my familiarity with the original book did hinder my enjoyment at least a little. Jane often felt out of character, not just from the original character, but from how she acted within this book. It would have been one thing if her personality were changed entirely, but here it seemed to alter based on whatever was required from her in a scene, which bothered me. Plus, I could have done without Helen Burns hanging around and commenting on everything that happened. It was still enjoyable, but slightly harder feel invested in than the first book.

The Bone Season by Samantha Shannon

“There was no normal. There never had been. ‘Normal’ and ‘natural’ were the biggest lies we’d ever created.” 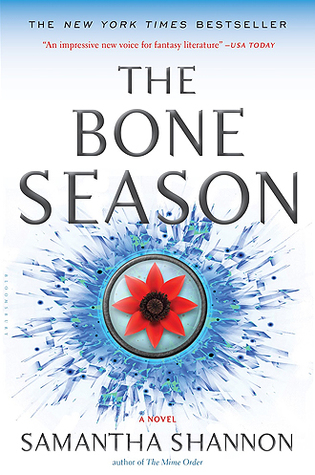 In the year 2059, London is ruled by an authoritarian regime, and clairvoyants like Paige Mahoney are illegal. Paige survives by working in the criminal underworld, until she’s kidnapped and taken to a secret city run by a powerful and mysterious race called the Rephaim.

I think we can just go ahead and crown Samantha Shannon the queen of worldbuilding, right? Because I’m blown away by the detail and intricacy of the world she’s created in this series. Even though I was definitely confused starting out, once I got the hang of things I loved this distortion of our familiar world that she’s created, and I can’t wait to explore more of it in the rest of the series.

While I loved the writing and the interesting point of view we get through Paige’s narration, the pacing of the story itself was quite slow, to the point that certain sections felt a bit dull. Particularly toward the beginning, there was a lot of info-dumping in order to explain what was happening. It would usually occur with a character simply sitting down and answering all of Paige’s questions, which put the entire story on pause for pages at a time. I get that it was necessary, given the complexity of the world, but I wish there had been a better way to convey the information.

I also read The Pale Dreamer, the prequel novella to this book, which I also rated 3.5 stars! It gave some great characterization to Paige and more information about her past, so I enjoyed it.