If We Were Villains

“You can justify anything if you do it poetically enough.”

Oliver Marks has just served ten years in jail – for a murder he may or may not have committed. On the day he’s released, he’s greeted by the man who put him in prison. Detective Colborne is retiring, but before he does, he wants to know what really happened a decade ago.

As one of seven young actors studying Shakespeare at an elite arts college, Oliver and his friends play the same roles onstage and off: hero, villain, tyrant, temptress, ingenue, extra. But when the casting changes, and the secondary characters usurp the stars, the plays spill dangerously over into life, and one of them is found dead. The rest face their greatest acting challenge yet: convincing the police, and themselves, that they are blameless.

Did my heart love till now? Forswear it, sight! For I ne’er saw true beauty till I read this freaking amazing book.

This isn’t the type of book that I would normally pick up, but on the advice of a friend (thanks, Dana), I decided to give it a try and, oh boy. I apologize in advance because you’re never going to get my to shut up about this book for the rest of my life, probably.

If We Were Villains follows seven students, seniors at an elite Shakespearean conservatory: Oliver (our narrator), James, Richard, Meredith, Alexander, Filippa, and Wren. Starting out, we know that in ten years, Oliver will just be getting out of prison, and as we go on we start to learn about the crime that he may have committed to put him there.

To say that this book is Shakespearean is almost too simple. Yes, all the characters are Shakespearean actors and frequently speak in lines from his plays, and yes, the book is divided into five acts and resembles the structure of a tragedy… but more than that, it simply feels Shakespearean. I would by no means call myself a Shakespeare expert — and I’m sure that there was even more to this story that I didn’t catch because of that — but even I could tell how brilliantly this book was influenced by and also subverted Shakespearean tropes.

Reading this book truly felt like reading a tragedy, since you know from the beginning how things are going to end and it’s simply a matter of watching the characters’ fatal flaws tear them apart. But like in any great Shakespeare tragedy, it never happens in the way that you expect. There were so many moments that I thought I finally knew how things were going to play out, only to be blown away once again by a new twist.

“But that is how a tragedy like ours or King Lear breaks your heart—by making you believe that the ending might still be happy, until the very last minute.”

The amount of foreshadowing in this book is ridiculous. After I finished, I had to go back and reread the first scene because I understood it in a whole new light. And then I reread a bunch of other scenes and screamed because I finally understood how important they were!! I would happily take an entire class on this book, with Shakespeare as the supplemental texts, just so that I could study every single scene. Can somebody make this happen, please??

Okay, let’s talk about these characters. Such a cast of well-developed, fascinating, morally gray characters you have never seen. They are, of course, the most delightfully pretentious people ever, as one would expect from a group of Shakespearean actors. And I know that that’s not something every reader will enjoy, but personally, I loved it.

(Sidenote: I would protect Filippa with my life.)

Watching these seven characters over the course of their senior year — as relationships change, crimes are committed, secrets come out — was endlessly compelling. Each of them essentially had a role to play, based on a Shakespearean character type (the hero, the villain, the temptress, etc.), but each of them rubbed up against the confines of those roles, occasionally shifting or switching and surprising me all over again.

“Actors are by nature volatile—alchemic creatures composed of incendiary elements, emotion and ego and envy. Heat them up, stir them together, and sometimes you get gold. Sometimes disaster.”

And, of course, there was the main relationship, which I don’t want to spoil for you because figuring it out was one of this book’s delightful mysteries. But if you know, you know. The tension? The growth? The tragedy? YES. *whispers* Plus there was the “there was only one bed” trope and it was perfect.

I cannot tell you how many times this book got actual, physical reactions out of me. There were points that I was legitimately shaking or muttering “no no no no no” out loud. When I finished, I screamed out loud (IF YOU KNOW, YOU KNOW) then immediately called my friend who made me read it (thanks again, Dana) to ramble about it for a half hour. If a book can get that kind of reaction out of me, I know it’s good.

I simply cannot stress enough how brilliant this book is. It’s been a week and I still haven’t stopped thinking about it or remembering bits of foreshadowing that make me gasp while I’m trying to fall asleep at night. I can already tell that this is something I’m going to return to again and again, and I am so, so glad that I decided to give it a chance.

“Do you blame Shakespeare for any of it?” The question is so unlikely, so nonsensical coming from such a sensible man, that I can’t suppress a smile. “I blame him for all of it,” I say. 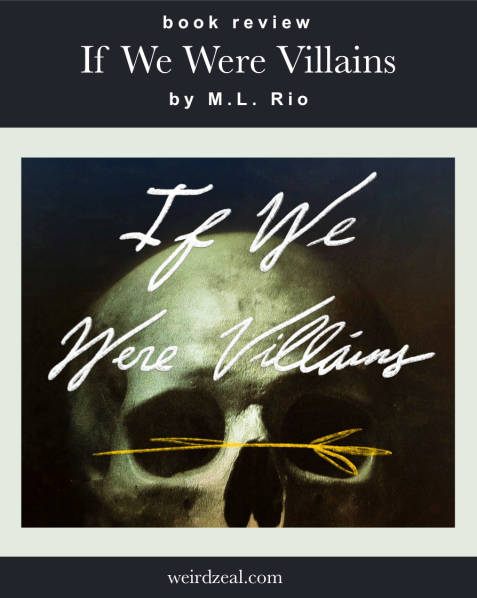 17 thoughts on “Review: If We Were Villains by M.L. Rio | shall I compare thee to a Shakespearean tragedy?”