We book-lovers talk a lot about adaptations, but we tend to mostly focus on movie and TV adaptations. While I love those as much as the next person, I think we are overlooking the underused potential of book-to-musical adaptations.

Plenty of amazing musicals have been adapted from books, like Wicked, Fun Home, Les Miserables, and The Lightning Thief, so it can be done. And while it might be easier to simply adapt books into non-musical plays, I think musicals are more fun, so that’s what I’m focusing on. All seven of the books that I’m talking about today would, in my opinion, be great as musicals — allow me to explain why!

The House in the Cerulean Sea by TJ Klune

Am I putting this book on this list mostly because the idea of the kids tormenting Linus through song and dance is the most delightful thought I’ve had all week? Maybe so!

This book follows a social worker named Linus who is sent to oversee an orphanage of dangerous magical children. As a book, it’s both hilarious and heartfelt, and I think a musical adaptation would capture that perfectly. The way I imagine it, nobody sings in the “real world” that Linus comes from, so when he goes to the orphanage, he’s shocked by all the singing that’s going on. (Basically a reverse The Sound of Music??) And of course he eventually learns to sing along with them!

The show-stopping number: No spoilers, but the ending would absolutely be the biggest number in the show and I would barely be able to watch it through my tears.

Here’s an idea: Like a Love Story jukebox musical…with all Madonna songs.

In this YA book, three teens growing up in 1989 New York bond over their love of Madonna and fighting for LGBTQ+ rights. I know that jukebox musicals are not always the most popular thing (which, as a huge fan of Mamma Mia, I will never understand), but is there anything more perfect than a story that’s already so tied to Madonna being told through her songs?

The show-stopping number: I wish I were more well-versed in Madonna so I could give more specific examples, but you know there has to be a huge rendition of “Vogue” at some point. I don’t care where it is, but it has to be there.

So imagine this: a gloriously hilarious historical musical adventure with fabulous costumes and, of course, narrated by Monty, Fleabag-style (as in, he frequently breaks the fourth wall to address the audience).

This book follows Henry “Monty” Montague, an 18th-century gentleman, during his Grand Tour of Europe, along with his best friend and his sister, and the hijinks that occur along the way. There’s already plenty of comedy, romance, and adventure, so it would only be a matter of adding in some musical numbers, and it would be perfect. Monty’s voice is the perfect amount of ridiculous and over-the-top to be the narrator for a musical.

The show-stopping number: a huge group number at Versailles that’s interrupted by Monty running through naked, as he does.

The Poet X by Elizabeth Acevedo

This book is already written in verse, so turning it into a musical wouldn’t be too difficult. Chop chop, let’s get on it, people!

The Poet X is about Xiomara, a young woman in Harlem growing up and finding her voice through slam poetry. Obviously, the musical would be narrated by Xiomara, and I can imagine the music becoming more complex and fitting her style as she comes into her own. I’m envisioning this as, like, Dear Evan Hansen meets In the Heights, aka just about the best combination possible. And it would 100% make me cry, which is all I can really ask for from a musical.

The show-stopping number: Obviously when Xiomara performs at the poetry slam for the first time!

Kind of a Big Deal by Shannon Hale

I’m cheating a little with this one, not only because this book isn’t out yet, but because it’s about a musical theatre actress and already includes musical numbers. And if that hasn’t convinced you to pick this up when it comes out August 25, I don’t know what will.

In this YA novel, Josie believes she’s peaked at eighteen and her acting career is done forever. Then she somehow transports herself into the books that she’s reading, which starts to feel like a second chance. This book is already a celebration of a love of both books and musicals, so I can’t imagine anything better. And I know that Josie would make a fantastic musical protagonist. (Don’t tell her that, though, because she would be way too pleased.)

The show-stopping number: Well…there might already be a big show-stopper in the book involving the Spice Girls?? I’ll say no more…

You Should See Me in a Crown by Leah Johnson

Yes, there might already be a musical about queer girls in Indiana going to prom (go listen to The Prom), but why can’t we have another??

You Should See Me in a Crown follows Liz Lighty, who joins the running for prom queen, hoping to win the scholarship that comes with it. The cast of characters in this book is already colorful and oftentimes larger-than-life, which would translate perfectly into a musical, and I can picture this being big, flashy, and hilarious. I’d love it if all of the characters have their own distinct musical style, especially Liz, to show how she stands out from everyone else at her school.

The show-stopping number: When Liz starts campaigning seriously and puts up that giant poster in her school, there has to be an epic number where she finally takes center stage after avoiding it for the whole show.

Can you imagine how incredible the effects for this show would be? I want nothing less than breathtaking costumes and set design, since it takes place in the early 1900s, and of course an absolute powerhouse of an actress to play January.

This book follows a young woman growing up isolated and unsure about her heritage, until she finds a book that starts to answer her questions and open magical doors in her life. Since the book made me cry, I would absolutely expect the musical to do the same. I just want beautiful songs and effects and for the magic of this story to translate into the magic of theatre, please??

The show-stopping number: A duet between January and her mother as January learns more about where she came from, which would make everyone in the audience sob.

Would you want to see any of these books as musicals? What do you think their show-stopping numbers would look like? What books would you like to see as musicals? 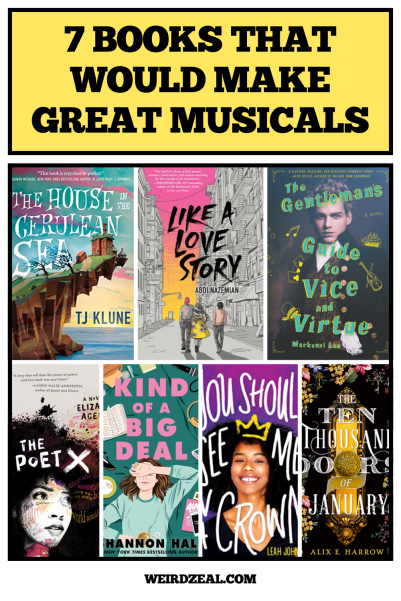 63 thoughts on “7 books that would make great musicals”