“All I had to do was wait, and my big love story would come. I would find the one. We would fall in love. And I’d get my happily ever after.”

Georgia has never been in love, never kissed anyone, never even had a crush – but as a fanfic-obsessed romantic she’s sure she’ll find her person one day.

As she starts university with her best friends, Pip and Jason, in a whole new town far from home, Georgia’s ready to find romance, and with her outgoing roommate on her side and a place in the Shakespeare Society, her ‘teenage dream’ is in sight.

But when her romance plan wreaks havoc amongst her friends, Georgia ends up in her own comedy of errors, and she starts to question why love seems so easy for other people but not for her. With new terms thrown at her – asexual, aromantic – Georgia is more uncertain about her feelings than ever.

Is she destined to remain loveless? Or has she been looking for the wrong thing all along?

Five stars doesn’t seem like enough to express the depth of how much it meant to me to read this book. It was like Alice Oseman somehow looked inside my brain, pulled out the essence of me, and wrote a book about it. Reading this, I felt like I was eighteen again, starting college and so unsure of who I was. Somehow, this book managed to put into words so much of what I’ve felt over the past few years, which is both terrifying and beautiful to read.

This book follows Georgia, who’s never had a relationship or even a crush, but who is absolutely obsessed with romance. As she starts university, she’s determined to finally get that authentic teen experience, but all of her plans to find love backfire on her.

Essentially, this is an aro-ace coming out story like I’ve never seen before. And if you’ll allow me, I’m going to get personal for a moment.

I think realizing that you’re aro or ace is different from many other identities. So much of the pride we see is about celebrating love and sexuality and connection to other people. Asexuality and aromanticism is about a lack of attraction. There’s a sense of loss that comes along with that, a feeling of being, well, loveless. You can’t have what everybody else supposedly has. Your version of pride will never be defiantly walking down the street holding hands with the person you love because odds are you’re not going to have that person. It’s slightly terrifying to realize that you might spend your life alone, a fate that society has taught you is to be avoided at all costs.

In Loveless, Georgia’s process of self-discovery allows her to feel all of this. She loves romance, and the realization that she won’t ever have an epic romance of her own is nothing short of a devastating loss. The book shows that it’s okay to feel that way, since there is a certain amount of grief in letting go a version of your future that you always imagined. But the book doesn’t stop there.

I have never, ever read a book that prioritizes and celebrates platonic relationships as much as this one does. Georgia’s realization of her identity is also a realization that she can have an epic love story — a love story that’s about friendship rather than romance. This book shows that friendships can be just as, if not more, important and fulfilling as romantic relationships.

“Give your friendships the magic you would give a romance. Because they’re just as important. Actually, for us, they’re way more important.”

Georgia isn’t the only one in this book who struggles with feeling loveless. Every single one of the main characters feels in some way or another that they’re not worthy or they’re unloveable in some way. I love the way that this shows the pressure that everyone, not just aro or ace folks, feels in regards to romance — everyone feels like they have to have a certain amount of experience by a certain age or prove that they’re worthy of love. The expectation that all people experience love in the same way or want the same thing is so unhealthy, which is a major theme in this book.

“In the end, that was the problem with romance. It was so easy to romanticise romance because it was everywhere.”

Speaking of other characters, let’s talk a little more about them, shall we? Because I adore them all.

Pip and Jason are Georgia’s best friends, who end up going to uni with her. Pip is basically the definition of a disaster lesbian, and Jason is essentially the human form of the teddy bear emoji. I would protect them with my life.

Then there’s Rooney, Georgia’s roommate, who I can’t even talk about without wanting to cry because I love her so much?? She’s kind of a mess and I will love her until my dying breath.

And of course, there’s Sunil, actual ray of sunshine, and my new favorite Osemanverse side character! Not only is he quite literally the Best Person In The Entire Planet, but he has impeccable taste in podcasts and bands. And he plays the cello!!!! (That last bit is unimportant but it made me love him even more.)

Despite all the emotional stuff and the fact that I cried at least 57 times while reading, this book is absolutely hilarious. Possibly the funniest of Alice Oseman’s books?? Shenanigans with Shakespeare, bouncy castle battles, hilarious misunderstandings, and so much banter. Anytime Pip and Rooney were on the page together, I immediately started grinning because their dynamic is so entertaining.

As usual, Alice Oseman’s writing style is easy to get immersed in. Reading it feels like I’m being told the story by a good friend. I flew through this book within a matter of hours, only taking one break for snacks, because I simply could not tear my eyes away from the page.

“Rooney: Might have to go back to good old-fashioned Meeting People In Real Life.
Georgia: ew.
hate that for me.”

I don’t even know what else to say about this book, because I don’t know if words can even properly express how much it meant for me to read this. If I had read this as a teenager, it genuinely would have changed my life. I’ve been anticipating this book for, I don’t know, two years?? Since long before we even had a title or synopsis. Not only did it live up to my expectations, but it far exceeded them. I already want to reread it.

I’ll just say this: I’ve read more books than I can count about love in so many different forms, including books that I love, books that have shaped me. But until now, I’d never read a book that tells me so plainly that the kind of love that I feel is just as worthy and important and powerful. And that means more to me than I can ever say.

“I had been so desperate for my idea of true love that I couldn’t even see it when it was right in front of my face.” 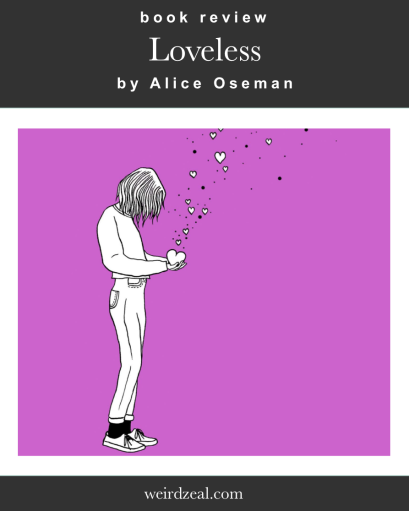 58 thoughts on “Review: Loveless by Alice Oseman | be prepared for A Lot Of Emotions”