Kind of a Big Deal

“Musicals were better than real life. And if Josie could make a wish, she’d live in one forever.” 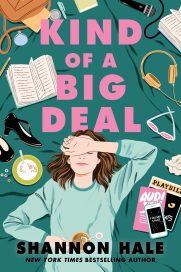 To be published August 25, 2020 by Roaring Brook Press

There’s nothing worse than peaking in high school. Nobody knows that better than Josie Pie.

She was kind of a big deal—she dropped out of high school to be a star! But the bigger you are, the harder you fall. And Josie fell. Hard. Ouch. Broadway dream: dead.

Literally. She reads a book and suddenly she’s inside it. And with each book, she’s a different character: a post-apocalyptic heroine, the lead in a YA rom-com, a 17th century wench in a corset.

It’s the perfect way to live out her fantasies. Book after book, Josie the failed star finds a new way to shine. But the longer she stays in a story, the harder it becomes to escape.

Will Josie find a story so good that she just stays forever?

This book has everything: Dramatic musical numbers. A family of overly attractive booksellers. Escaping reality (literally) by reading books. Realistic depictions of teenage relationships and friendships and how they change over time. An unlikable main character who I also kind of love. Theatre kids. Pretentious English majors. Impromptu Spice Girls??

Josie Pie dropped out of high school to move to New York and become an actress, but that didn’t exactly work out for her. When opportunities started drying up after only a few months, she took a job as a nanny and, when the family decided to move to Montana, she went with them. Now she’s taking care of five-year-old Mia and trying to figure out what her life is going to look like. Hoping to escape the real world for a bit, she opens up a book…and finds herself transported inside it.

This book very much feels like it was written by a book-and-theatre nerd, for book-and-theatre nerds. As someone who is both, I enjoyed it immensely. It gets quite meta, since Josie ends up inside books of many different genres, and we get to explore and play with the different tropes in each of them. Anyone who spends too much of their time reading will probably find many parts of this relatable.

Josie herself is not the most likable character, but in a way that’s clearly deliberate. She’s used to being the star of the show, and she acts like it. For much of the book, she’s somewhat naive and in denial. It can be frustrating to read, but it also felt realistic for someone in her situation. Despite this, I liked her a lot (though I do tend to enjoy unlikable characters in general). My biggest complaint was that her voice sometimes sounded immature and a lot younger than eighteen, which could take me out of the story.

Not to mention, so much of what Josie was going through felt, uh, uncomfortably relatable. Everyone thought she was going to succeed in life, but then she moved to New York and completely failed. And now she’s had to put everything on hold and reevaluate all of her life goals. As someone who also thought she was going places and has had to pause all of her dreams thanks to coronavirus (including…*checks notes* literally also moving to New York), that hit kinda close to home! The message that this book ends on genuinely meant a lot to me.

“We tend to think of life as all linear,” Nina went on, “as if each moment, each year, has to be better than the last, and if it’s not, we failed. But we’re all of it at the same time. And then some. So be patient with yourself, Josie. Don’t judge yourself by any one moment. Allow yourself room to change.”

Shannon Hale also managed to capture that very teenage feeling that you have to have your life figured out by a certain age, and that you then have to stick with that decision forever or else you’ve failed. I love whenever books can address and dismantle this idea, and this book does it so well.

Much of the book is focused on Josie, but there were a few other standout characters. One of my favorites, strangely enough, was Mia, the little girl that Josie was taking care of. Shannon Hale is so good at creating realistic and adorable child characters whom I love!

We also get to know Justin, Josie high school boyfriend who’s kind of been ghosting her lately. There’s Nina, her best friend, who’s doing great things with her life and making Josie feel a bit left behind. And Deo, the cute local bookseller who seems to take an immediate interest in Josie. All of these characters, and more, keep showing up as she’s transported into books, often in the most hilarious ways.

I’m a huge fan of books that incorporate a bit of magic into a contemporary setting, and I especially loved how this one did it. The premise of Josie being pulled into the books she’s reading is just so much fun, and though I obviously enjoyed certain books more than others, I appreciated the creativity that went into each of those scenarios. Also, each one showed a little something about what Josie wants from life and allowed her to grow as a character. And let’s be real, if it were me, I would probably enjoy being in her situation a little too much.

This book is quirky, unique, and endlessly entertaining. It manages to ask serious questions like What if you had the chance to redo parts of your life but better? while also asking What if you could fight off zombies while also performing a musical number? I found myself laughing out loud so many times while reading. If you like musicals, coming of age stories, or would rather live in fictional worlds than real life, then go pick up this book ASAP.

“Even worse than peaking in high school was to never peak at all. To treat life like a big waiting room, idly reading whatever magazines were available, playing a game on your phone, killing time till your name was finally called.”

26 thoughts on “ARC Review: Kind of a Big Deal by Shannon Hale | this book deserves a standing ovation”