Just over a year ago, I posted about five books that I guessed I would rate 5 stars. It took me a while, but I have finally read all of the books from that list and I’m ready to talk about them!

Spoiler alert: I’m apparently terrible at judging my own reading taste because I rated none of these 5 stars. Don’t get me wrong, I enjoyed most of them, and a few came very close to 5 stars, but sadly I didn’t find any new all-time favorites.

Nonetheless, I’m going to be telling you a little able each of the books I originally predicted, as well as choosing five new books that I think I will rate 5 stars. Let’s get into it!

Results of my predictions

This alternate history set in the Tudor era retells the story of Lady Jane Grey and her brief, ill-fated reign as the queen of England. I had a great time reading this book, since it’s full of lighthearted humor and lots of horse puns. However, the silliness made it difficult to actually get emotionally invested on a deeper level, which led to a 4 star rating rather than 5 stars.

The Long Way to a Small, Angry Planet by Becky Chambers

Following the crew of a spacecraft called the Wayfarer, this sci-fi novel is episodic and character focused, which I really appreciated. I’m a sucker for found family, so I enjoyed that aspect of this book quite a bit. This is an instance where I can’t really pinpoint anything that I disliked or felt was lacking that made me rate this 4 stars, but it just didn’t feel quite up to that level for me. Still, I enjoyed this enough that I have both of the sequels on hold from my library!

The Last Magician by Lisa Maxwell

Ah yes, the black sheep of this bunch, the one that I actually, genuinely disliked. I haven’t published my review of this yet, so stay tuned for more of my thoughts. This book involves a time traveler joining a crew of secret magic users from 1902 to steal a book that could change history, and in theory that sounds like something I would love (I mean, obviously — I thought I would rate it 5 stars). But unfortunately, I either didn’t care about or fully disliked all of the characters, and the story was so slow that it took me almost an entire month to finish this book.

Ivy Aberdeen’s Letter to the World by Ashley Herring Blake 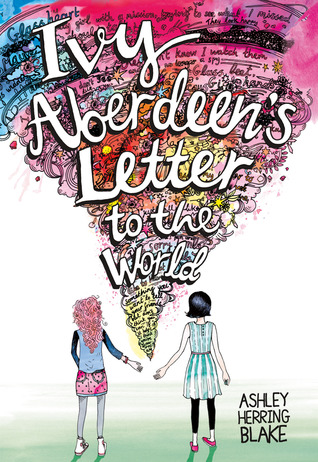 This middle grade book follows twelve-year-old Ivy Aberdeen after her home is destroyed in a tornado and she tries to find her place among her family and friends. Out of these five books, this one probably came the closest to getting 5 stars, because it definitely made me cry a little and was an emotional rollercoaster from start to finish. Though this wasn’t quite up to a 5 star level, it is among my favorite middle grade books now.

The Darkest Part of the Forest by Holly Black

Set in a town that butts up against the faerie world, this book follows siblings Hazel and Ben, and a mysterious horned boy in a glass coffin. I absolutely loved the vibes of this book, which gave me chills while reading. It was perfectly eerie and mysterious. I also loved all of the relationships, but especially the one between Hazel and Ben. Once again, I can’t pinpoint exactly what makes this 4.5 stars instead of 5, but that’s my rating.

While I may not have been successful with this last list, I have total unearned confidence that this time I will find five books that I will absolutely adore! Do I even know what I like to read anymore? Apparently not! But am I going to try to predict how these will go? Absolutely!

Okay, choosing these books was more difficult than I expected because I guess I no longer have any faith that I’ll enjoy any of the books on my TBR. But after much deliberation, I have here five more books that I predict I will rate 5 stars. Let’s do this!

Picture Us In the Light by Kelly Loy Gilbert

Danny Cheng has always known his parents have secrets. But when he discovers a taped-up box in his father’s closet filled with old letters and a file on a powerful Silicon Valley family, he realizes there’s much more to his family’s past than he ever imagined.

Danny has been an artist for as long as he can remember and it seems his path is set, with a scholarship to RISD and his family’s blessing to pursue the career he’s always dreamed of. Still, contemplating a future without his best friend, Harry Wong, by his side makes Danny feel a panic he can barely put into words. Harry and Danny’s lives are deeply intertwined and as they approach the one-year anniversary of a tragedy that shook their friend group to its core, Danny can’t stop asking himself if Harry is truly in love with his girlfriend, Regina Chan.

When Danny digs deeper into his parents’ past, he uncovers a secret that disturbs the foundations of his family history and the carefully constructed facade his parents have maintained begins to crumble. With everything he loves in danger of being stripped away, Danny must face the ghosts of the past in order to build a future that belongs to him.

Ash @ Starlight Strands’ review of this book absolutely convinced me not only that I have to pick up this book, but that I’ll probably love it. From what I can tell, this is the kind of YA contemporary that I tend to adore: beautiful writing, amazing characters, and will definitely make me cry. I also love the sound of the focus on family relationships and uncovering family secrets! I have really high hopes for this book, so fingers crossed that they are fulfilled.

Thirteen Doorways, Wolves Behind Them All by Laura Ruby

The unforgettable story of two young women—one living, one dead—dealing with loss, desire, and the fragility of the American dream during WWII.

When Frankie’s mother died and her father left her and her siblings at an orphanage in Chicago, it was supposed to be only temporary—just long enough for him to get back on his feet and be able to provide for them once again. That’s why Frankie’s not prepared for the day that he arrives for his weekend visit with a new woman on his arm and out-of-state train tickets in his pocket.

Now Frankie and her sister, Toni, are abandoned alongside so many other orphans—two young, unwanted women doing everything they can to survive.

And as the embers of the Great Depression are kindled into the fires of World War II, and the shadows of injustice, poverty, and death walk the streets in broad daylight, it will be up to Frankie to find something worth holding on to in the ruins of this shattered America—every minute of every day spent wondering if the life she’s able to carve out will be enough.

Not only is this title absolutely phenomenal, but this book’s premise is checking so many of my boxes. Historical fiction with a pinch of fantasy, sister relationships, deconstructing the American dream — yes, yes, and yes. Also, it’s narrated by a freaking ghost?? I need you guys to appreciate how amazing this sounds.

Other Words for Home by Jasmine Warga

Jude never thought she’d be leaving her beloved older brother and father behind, all the way across the ocean in Syria. But when things in her hometown start becoming volatile, Jude and her mother are sent to live in Cincinnati with relatives.

At first, everything in America seems too fast and too loud. The American movies that Jude has always loved haven’t quite prepared her for starting school in the US—and her new label of “Middle Eastern,” an identity she’s never known before. But this life also brings unexpected surprises—there are new friends, a whole new family, and a school musical that Jude might just try out for. Maybe America, too, is a place where Jude can be seen as she really is.

Going for a bit of a wild card here, since not only is this a middle grade — which I rarely rate 5 stars — but it’s written in verse. Though I tend to enjoy books in verse, I don’t usually love them. But hopefully I will with this one! From the reviews I’ve seen, this book sounds absolutely lovely and I’m guessing that it will also make me cry.

The Once and Future Witches by Alix E. Harrow

In 1893, there’s no such thing as witches. There used to be, in the wild, dark days before the burnings began, but now witching is nothing but tidy charms and nursery rhymes. If the modern woman wants any measure of power, she must find it at the ballot box.

But when the Eastwood sisters — James Juniper, Agnes Amaranth, and Beatrice Belladonna — join the suffragists of New Salem, they begin to pursue the forgotten words and ways that might turn the women’s movement into the witch’s movement. Stalked by shadows and sickness, hunted by forces who will not suffer a witch to vote-and perhaps not even to live-the sisters will need to delve into the oldest magics, draw new alliances, and heal the bond between them if they want to survive.

There’s no such thing as witches. But there will be.

This is the only book on this list with an author who isn’t new to me, since I read (and loved) The Ten Thousand Doors of January earlier this year. It’s also the only book that isn’t out yet. But historical witches and the suffrage movement and critiquing the patriarchy sounds so incredibly good that I feel like I have to love this book.

Tarisai has always longed for the warmth of a family. She was raised in isolation by a mysterious, often absent mother known only as The Lady. The Lady sends her to the capital of the global empire of Aritsar to compete with other children to be chosen as one of the Crown Prince’s Council of 11. If she’s picked, she’ll be joined with the other Council members through the Ray, a bond deeper than blood. That closeness is irresistible to Tarisai, who has always wanted to belong somewhere. But The Lady has other ideas, including a magical wish that Tarisai is compelled to obey: Kill the Crown Prince once she gains his trust. Tarisai won’t stand by and become someone’s pawn—but is she strong enough to choose a different path for herself?

More than anything, I’m just hoping so hard that I love this book, since it feels like way too long since I absolutely loved a YA fantasy. Honestly, the synopsis itself isn’t the most eye-catching, but all of the reviews I’ve seen are nothing but positive, so I’m certainly intrigued. I think (I hope) that if I’m going to love a YA fantasy in the near future, it’s going to be this one.

Huh, I unknowingly chose three YA books, one middle grade, and one adult book, just like with my first list. Would you look at that.

Anyway, wish me luck with these books! Hopefully it won’t take me another year to give you an update.

Have you read any of the books on my new predictions list? What books do you think you’ll rate 5 stars?