A Neon Darkness (The Bright Sessions #2)

“I think about being happy and whether that’s something I’ve ever felt. I’m not sure it is, but I think it must be something close to this.” 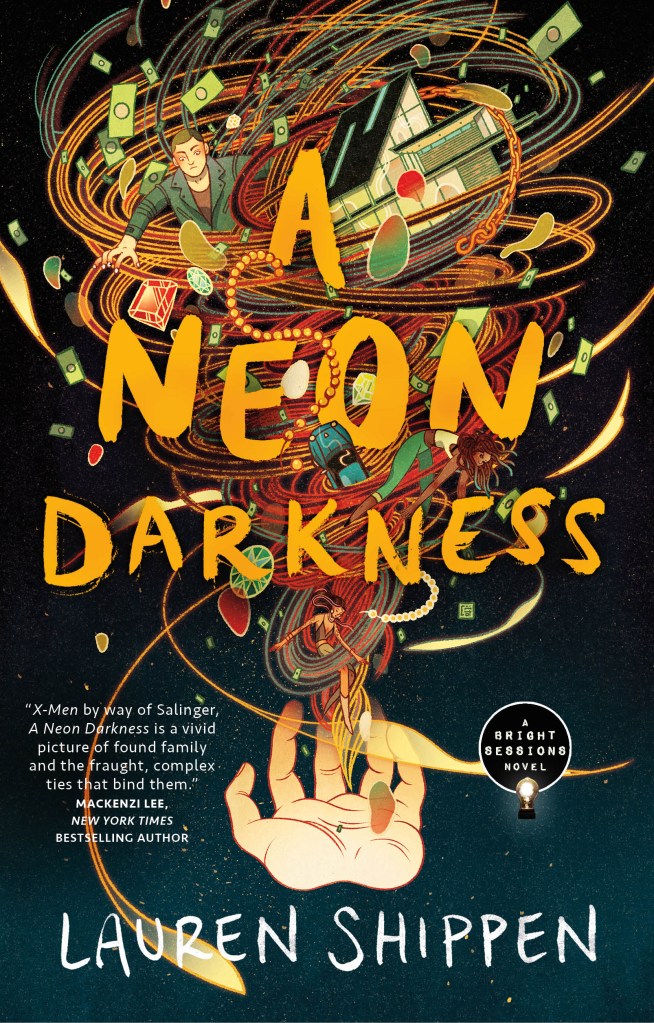 Los Angeles, 2006. Eighteen-year-old Robert Gorham arrives in L.A. amid the desert heat and the soft buzz of neon. He came alone with one goal: he wants to see the ocean. And Robert always gets what he wants.

At a very young age, Robert discovered he had the unusual ability to make those close to him want whatever he wants. He wanted dessert instead of dinner? His mother served it. He wanted his Frisbee back? His father walked off the roof to bring it to him faster. He wanted to be alone? They both disappeared. Forever.

But things will be different in L.A. He meets a group of strange friends who could help him. Friends who can do things like produce flames without flint, conduct electricity with their hands, and see visions of the past. They call themselves Unusuals and finally, finally, Robert belongs.

When a tall figure, immune to their powers, discovers them, the first family that Robert has ever wanted is at risk of being destroyed. The only way to keep them all together is to get his powers under control.

But control is a sacrifice he might not be willing to make.

First of all, that if you haven’t already, go listen to The Bright Sessions podcast. This book and the one that came before it are both novelizations of that podcast, but while The Infinite Noise covers a story that’s already been told on the show, A Neon Darkness is a whole new story. All that said, you don’t have to have listened to the podcast or read The Infinite Noise to enjoy this book. I just think you should because they’re amazing.

A Neon Darkness follows Robert, an eighteen year old who can manipulate others to do whatever he wants. He’s spent the last few years traveling the country alone and made his way to Los Angeles in hopes of seeing the ocean. He’s always believed that he’s the only one who can do what he does, the only one with extraordinary abilities — but that changes when he makes some new friends who have secrets of their own.

Anyone who has listened to The Bright Sessions knows exactly who Damien is: he’s the villain. He may have his humanizing moments, but it’s clear that he’s not a good person. I was a little wary going into this book because stories from the POV of the villain can be hit or miss for me, but I should have known to trust Lauren Shippen. She made me understand Robert/Damien’s character more than I ever have before, all while showing how abhorrent many of his actions are.

Even within his own story, Damien is the bad guy. Shippen never shies away from that or tries to justify his actions, but as the reader you also feel like you understand, even sympathize with him. And it’s uncomfortable! You’re not supposed to like him – you don’t like him – but he’s still a fascinating character to follow.

It’s hard to completely hate a character when their primary motivation is simply to be loved and understood, but what makes Damien the villain is that he goes about it in completely the wrong way. In some ways, it’s not his fault, because he’s never had the opportunity to learn that love can’t be forced. But at the same time, it’s entirely his fault because he never listens to the people telling him to stop or tries to fix his mistakes. He blames everyone except himself because he’s never had to face consequences for his actions before.

“I’m not solely responsible. I can’t be. Because if I am — if I actually took ownership over the things I’ve done — I’m not sure I could live with the person I am. But I have to live with him. So it has to be everybody else’s fault.”

He’s just *clenches fist* such a well-developed morally gray character! You want to throttle him but you also can’t help but feel deeply, deeply sorry for him and what he’s been through. Even though some of what he’s been through is his own fault! It’s confusing and uncomfortable in the best possible way.

Though the plot is slow-moving and uncomplicated, this is more of a character study than anything else. It truly reads like a villain origin story because you can only watch, horrified, as things unravel. You watch Damien’s relationships with the little family he forms grow and then start to break because of his actions.

Speaking of which, I should probably mention the other characters. Indah, Neon, and Marley, who make up the group that Damien finds himself a part of, are all wonderfully developed, each with their own backstory and complex relationships with each other and with Damien’s ability.

“The boy whose wants infect everyone else can’t even articulate what he wants, even though it’s as simple as wanting to be wrapped up in someone’s arms. To feel loved. To feel safe, for just one goddamned second.”

This book has no easy answers regarding Damien’s morality. By the end, I felt like my emotions had been manipulated almost as much as the other characters’. Even though it was not the most comfortable way to finish the book, I absolutely loved it, because if a book can affect my emotions that much, it’s done its job.

And I have to mention that Lauren’s Shippen’s writing is, once again, absolutely phenomenal. I love how I could recognize her style, even though the voice and tone of this book is so different to The Infinite Noise. She transported me to the buzzing neon and desert heat of mid-2000s Los Angeles, to the point that I felt like I was there alongside the characters.

This book made me question everything I thought I knew about Damien and fall in love with a whole new set of characters. If you’re a fan of The Bright Sessions, you need to check out this book, and if you’re not, it’s never too late to jump aboard! Now I’ll just sit here eagerly awaiting the next novel in this series.

“I hate that dark little part of me that craves comfort, craves a soft hand and a warm body, but as much as I despise it, I can’t destroy it. It rules me, and I rule everyone else.”

10 thoughts on “ARC Review: A Neon Darkness by Lauren Shippen | a villain origin story of the highest quality”