Well hello there! I haven’t written a writing update since July. I guess I should probably do that now, then, huh?

Currently, I’m working on the second draft of a novel that I wrote last year (hereafter referred to as “the dragon WIP”). My progress on that has been all over the place (I failed Camp NaNoWriMo, by the way), but at the end of August I set a goal for myself to finish the draft before November. It’s much closer than I would have liked, but it’s looking like I’m actually going to hit that goal.

Not going to lie, I didn’t actually believe I would manage it until, like, three days ago. I’ve been chronically behind ever since I started, and for a while it seemed like there was no way I would finish in time. But within the last week and a half or so, I finally buckled down and got to it, even if it meant having absolutely no free time. But that’s okay! Moral of the story, kids, is that if you have an arbitrary goal that you set for yourself, you should do whatever it takes, even sacrificing sleep and self care, to hit it. Yep.

Still, there have been some days—even many days in a row—where I just don’t have it in me to be creative, whether because I’m overwhelmed by the world or just in a general state of mind-numbness. Even though it’s frustrating, I kind of have to accept it. That’s something I’ve had to learn in 2020: being kind to myself creatively, because I can’t be at 100% all the time.

But NaNoWriMo is almost here, which means AHAHA SCREW BEING KIND TO MYSELF IT’S TIME TO WRITE UNTIL MY BRAIN MELTS BABEYYYY.

We’ll get to that.

Right now, I have three chapters left to edit. Just seventeen pages. And a lot of that won’t require huge changes since I significantly rewrote the ending earlier this year. So I’ll probably finish within the next day or two.

Originally, my plan was to finish draft 2 so I could dive into draft 3 during NaNoWriMo, but I decided that I needed a little more time to let it sit before starting a new draft with fresh eyes. I haven’t exactly figured out what I’ll be doing with draft 3, but I imagine I’ll be focusing more on voice and style. Should be fun!

If you need me, I’ll just be staring at the last 17 pages of my WIP and screaming internally.

In all honesty, though, as tough as this WIP has been, I don’t think I’ll get tired of working on it anytime soon. I’m looking forward to taking a break so that my brain can be in a different space for a while, but I’m also eager get back into it and make it even better. These characters only get more beloved to me the longer I stay with them.

So I’ll leave you with some more songs for my main character, Nat:

Now that I’m finishing up one project, it’s time to turn my attention to the next one! As usual, I’m planning to participate in National Novel Writing Month in November, a writing challenge with the goal of writing 50,000 words in 30 days. This will be my seventh year doing it (😱). If you’re also planning to do NaNo, you should add me as a buddy!

Like I said, I decided to take a break from my dragon WIP to focus on a new story for a while. I only had the idea for the novel I’ll be writing a few weeks ago, and I’ve barely had time to plan anything since I’ve been rushing to finish the dragon WIP, so now NaNoWriMo is less than a week away and I still have so much to figure out. Yikes!!

That said, I do know a few things. My NaNo project is going to be a YA contemporary fantasy set at an elite, artsy boarding school, and it’s going to have major Fall Vibes™ and definitely a dark academia aesthetic.

Here’s what I do know: There will be three POVs, and the narrators’ names are Flora, Kate, and Beanie. There will be some very pretentious and smart characters, some examination of privilege in academia, and heavy-handed metaphors about academic pressure. There will be monsters and theatre productions and found family (naturally) and antagonism-to-lovers romance.

Basically, it’s a combination of my love for Ninth House, If We Were Villains, and The Dead Poets Society as well as an outlet to express my frustration with my own experiences in academia.

I’m very excited for it! Even though I barely have anything planned!

Here’s a little aesthetic thing I made to show the Mood: 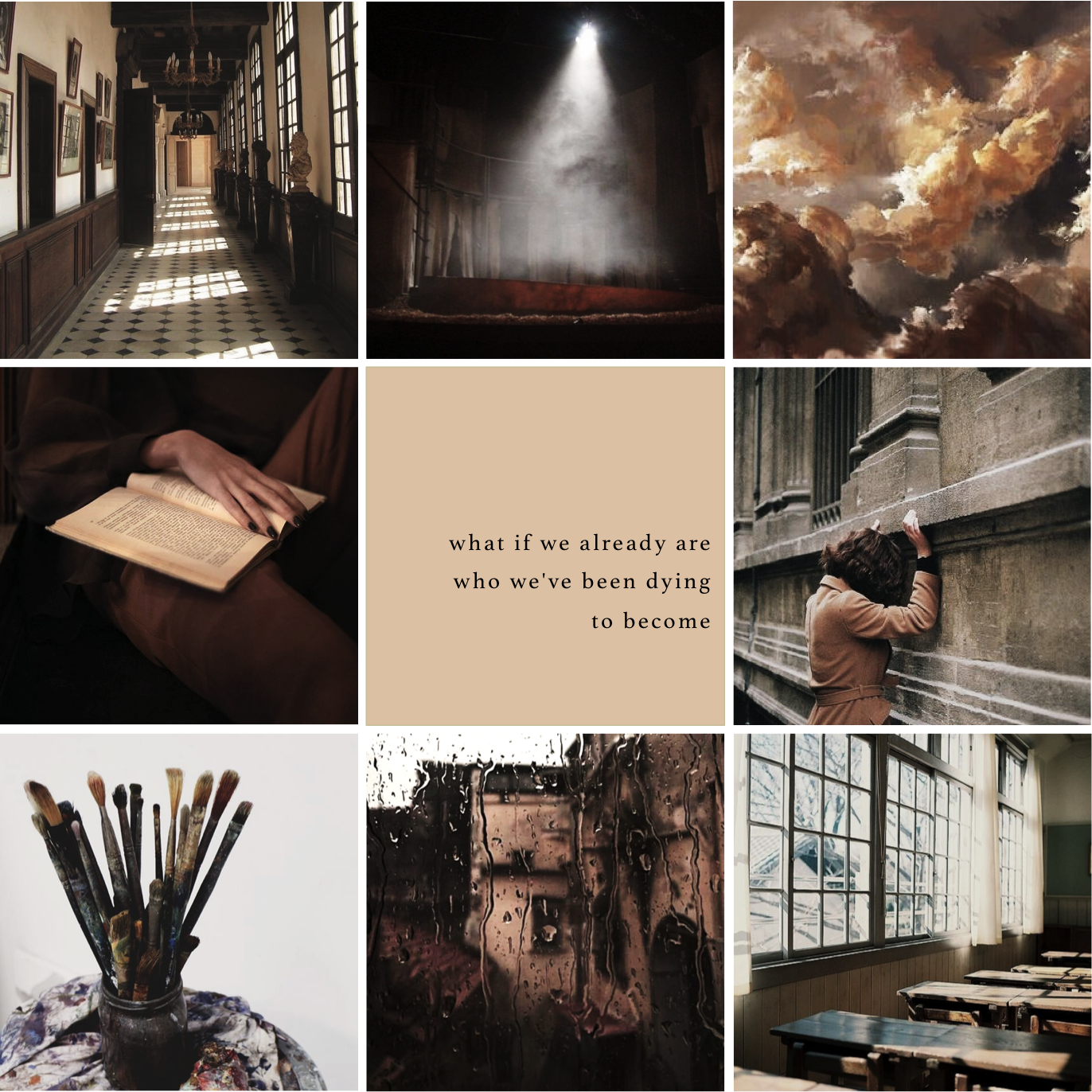 So that’s my project! And now I have the next six days to figure out what I’m going to write about for a month. I’ve tried diving into a new project for NaNoWriMo without planning anything out, but that’s never worked very well. Pantsing is not my style.

I get the feeling that the results of the US election are going to massively affect my writing, so I’m hoping that things don’t go like they did in 2016 (for so many reasons) or else I don’t know how I’m going to continue writing. It’s going to be a stressful start to the month. (So if you’re in the US, go vote so that I can finish NaNoWriMo. Also, you know, so that this country doesn’t crumble into fascism. 😌)

Wish me luck with finishing everything in time! And if you’re also doing NaNoWriMo (or just want some writing inspiration in general), check out this collaboration post I did with some other bloggers about writing advice. It’s pretty great, if I do say so myself.

Are you working on any writing projects right now? How are they going? Are you planning to participate in NaNoWriMo?