I don’t read much nonfiction—what can I say? I like a narrative—but within the past year or so, I’ve pushed myself to try some out and actually found some that I’ve really enjoyed. For me, the trick is audiobooks, since I can basically trick my brain into thinking I’m just listening to a really long podcast.

But anyway, if you’re like me and aren’t sure if nonfiction is for you (or if you just need some more recommendations), here are some books that I’ve really enjoyed and you might too. Let’s get into them!

The Library Book by Susan Orlean

Recounting the events surrounding the 1986 fire at the Los Angeles Public Library, including the search for a possible arsonist as well as examining libraries past and present around the world, this book combines true crime, history, and a bit of memoir. As the title would suggest, it’s essentially a celebration of, well, libraries—the people who made them what they are today, the buildings themselves, the patrons, and of course the librarians. I learned so much and loved all the detail that went into every section.

This book follows the author’s travels across the United States to the queer communities in so-called “flyover states” and conservative areas. Not only does it examine why LGBT folks stay, and thrive, in red states instead of flocking to big cities, but it recognizes the strong sense of activism, community, and acceptance that are so intrinsic to the queer spaces created in these areas. This is one of my absolute favorite nonfiction books—beautifully written and incredibly heartwarming all the way through.

Caste: The Origins of Our Discontents by Isabel Wilkerson

Isabel Wilkerson examines the unspoken, race-based caste system in the United States that developed from its foundations of slavery, comparing it to the caste systems of India and Nazi Germany. This book looks at how this country has been shaped by caste, even in ways that are difficult to recognize, and offers a new way of looking at hierarchy and history. I thought this was absolutely brilliant and it deserves every bit of praise that it’s gotten.

This graphic memoir is all about Tillie Walden growing up as a figure skater, which she was good at but hated, as she figured out her identity apart from skating through her teenage years. I’m a big fan of all of Tillie Walden’s books and this is no exception—the art is gorgeous and the way she tells her story is poignant and feels so real.

The Lady from the Black Lagoon: Hollywood Monsters and the Lost Legacy of Milicent Patrick by Mallory O’Meara

The life and legacy of Milicent Patrick, the woman who created the Creature from the Black Lagoon, and was erased by her male colleagues, but this book brings it to light, along with the author’s research journey and a fascinating history of women in Hollywood. Not only is this book an important look at how certain voices are not heard or appreciated in media, but I definitely learned a lot and gained new appreciation for the filmmaking process.

You might know this one from the musical or recognize the author as the creator of the Bechdel test, but I think this is worth reading no matter what. This graphic memoir is all about the relationship between the author and her father, particularly on her realization that they’re both gay and her father’s eventual death. It’s beautifully written, darkly funny, and it feels so, so real.

Catch and Kill: Lies, Spies, and a Conspiracy to Protect Predators by Ronan Farrow

Following the author’s investigation into accusations against Harvey Weinstein and other powerful predators, this is a simultaneously horrifying and fascinating true crime story all about corruption and truth. It’s certainly not an easy read, considering the subject matter, but it’s brilliantly written and thoroughly researched, and it’s nice to have the reminder that in real life the good guys do win sometimes.

So You Want to Talk About Race by Ijeoma Oluo

Here’s a book that I just want to shove into everyone’s hands and make them read it. Covering everything from system racism to intersectionality to cultural appropriation, and so much more, this is essentially The Book for anyone who wants pointers on how to talk about race in an informed, respectful, and impactful way.

Do you read much nonfiction? What are some of your favorite nonfiction books? Have you read any of these? 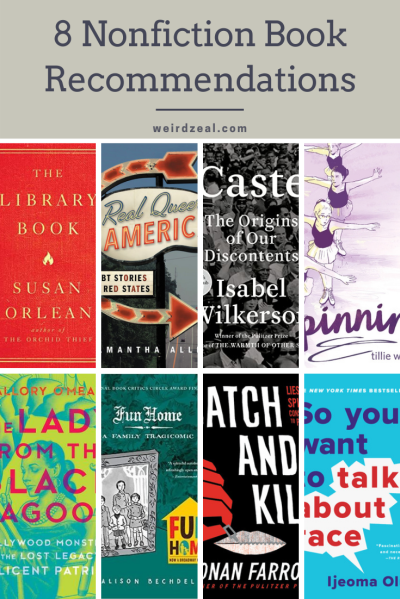